newest treasure in my collection 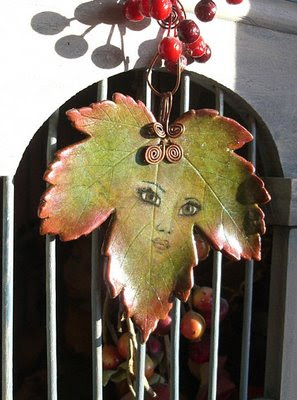 my prescious !!! ... I just purchased this beautiful pendant from my dear artist friend Valerie from Elysianfield Originals and like to share it with everybody ! Isn´t it absolutly beautiful ???? Now I wait for the special moment to wear it ! :o)
Valerie´s Etsy shop:
elysianfields.etsy.com
Eingestellt von Silke Janas-Schloesser um 04:43

and I GOT a blog award, my First !!! Thanks sooo much Nikki from Witch and Wizard Miniatures!
Now the rule of this award is : I have to give this to 5 other bloggers. You need to each pass this onto another 5 blogs, and then each person has to list their 5 addictions too ans so on and so on.
I prefer to give this award to non-doll artists, because most of them will have this award very soon AND there will be another Tuesday for the "kissed by a Prince" award soon ;o)
---------------------
Es ist wieder Dienstag und Ich selbst habe einen Blog Award bekommen ! Meinen Ersten ! ( siehe Bild) Ganz lieben Dank dafür an Nikki ( siehe Link) !!! Nun ist die Regel dieses Awards dass ich ihn an 5 Blogs weitergeben muß, na und das mach ich doch jetzt sofort ! I bevorzuge den Preis an NICHT-Puppenseiten zu vergeben, da diese sowieso bald alle den Preis haben werden und ich ja auch bald wieder meinen "Kissed by a Prince" award vergeben möchte :o)

The award goes to: 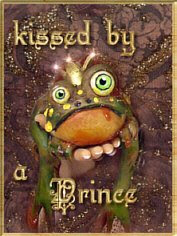 ...that means I have another chance to give the Tuesday´s award " Kissed by a Prince" for Blog I really enjoy and amire... and I will take the chance !!!( you can read about the award in my older posts. If I probably don´t know your blog or haven´t noticed it for long, please don´t hesitate to invite me to visit your blog !and we here ( me,my assistant Liesl Troll, my King of thieves and Ruby Tuesday with her magical Toad will decide if you may deeeeeeseeerrrrve that award too in future ;o)

For this time, the award goes to:
Debbie from Tiny Treasures - I visit you almost daily and truly enjoy your postings!
The Gobblin from Goblinz Bloggie we love you !
Ute and her Trollsshe´s unbelievable creative- watch her hat !
to Flora from Bonehead Studios we switch off your music on the site but we deeply love all your postings
and to Lotti and her Wusels from Wuselhausen, we would love to see more finished Wusels but we enjoy to watch them growing :o)/ wir würden uns wünschen mehr fertige Wusels zu sehen, aber wir lieben es auch sie heranwachsen zu sehen ! 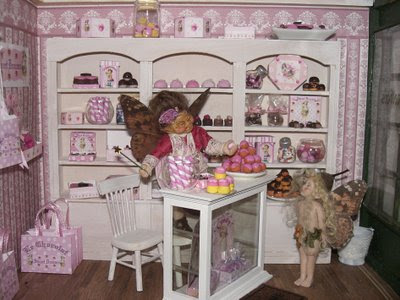 -Advertise-commercial-
The Fairy Godmother sends you sweet candy wishes for this special day !
If you need some magical sweets, candy or chocolate for your dearest come to the Fairy Godmother´s Patisserie !!!
Opening hours: from sunset till the morning dew comes.... 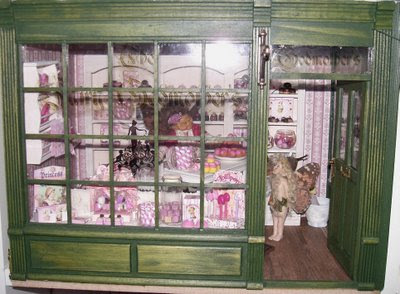 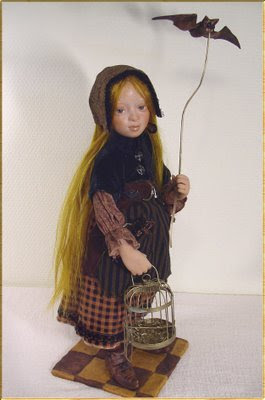 Okay again not yet a Friday girl because her name is Emily Wednesday but I´m sure she will make a great witch when grown up. She´s about 16", with her bat Ludmilla, she measures 20" 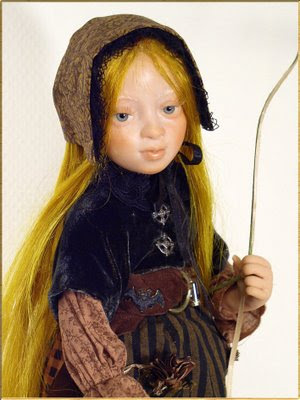 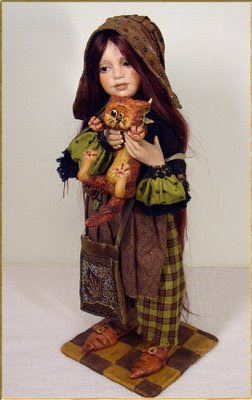 ..what is Friday 13th without seeing a black cat or witch with a cat ??? okay the cat is not black and the girl is still young and needs some time till she will be a good witch... but here she comes, about 17" tall. Her name ? Elizabeth Thursday !. I forgot, the cat´s name is Daisy. 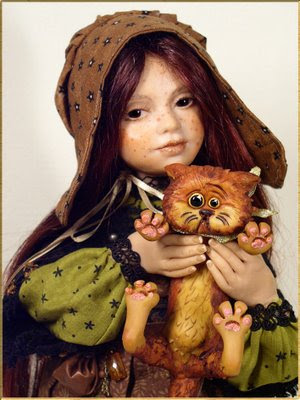 Tuesday is gone and no "Kissed by a Prince" Award ? Oh not every Tuesday ,just one per month , I´m fully back to work and have not enough time for surfing at the internet or Blogs.I hope that´s okay for you all.

I think I have the half scale fever... look what I just created and hopefully more will follow.... 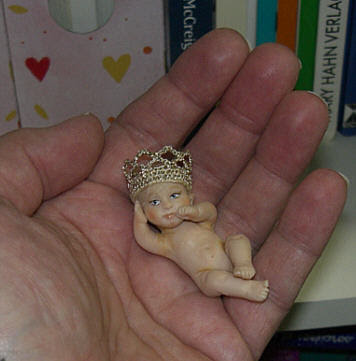 Where the green Toad came from...

We have that new little companion here living with us ( me, my family, the Trolls,the Fairies,the gnomes, etc...).
Her name is Ruby Tuesday, she was born on a TUESDAY. She is..hmm...clever. The cleverest girl I met and guess what´s going on here... 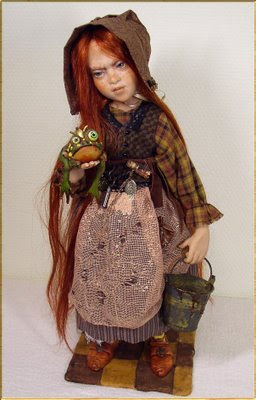 My dear assistant Liesl Troll, her nature is simple, nosy and wanting almost everything had welcomed Ruby very heartly with a tea party. When Liesl recognised Ruby had that special pet, that green Frog or Toad or whatever wearing a little golden crown, she wanted to know how´s about that.
Clever Ruby told Liesl she had to find out by herself, she just need to kiss that green thing. But this shouldn´t be for free, Liesl had to give Ruby something to let her kiss that green Whimsy.
Liesl told me her thougts, it might be an enchanted Prince waiting for her...
No wonder, Liesl took out her baggage with hidden sweets, candy, chocolate, her collection of dollies and teddybears and let Ruby choose from.
Ruby choose candy.
Liesl kissed the pet.
Nothing happened.
Liesl got angry.
Ruby said ,try it again and choose chocolate....
Liesl tried it again.
Nothing.
Liesl got sad.
Ruby offered again Liesl might try another kiss...
Liesl agreed and Ruby choose a teddybear.
Liesl kissed the greenish one.
Nothing happened....
again...
again..
again. 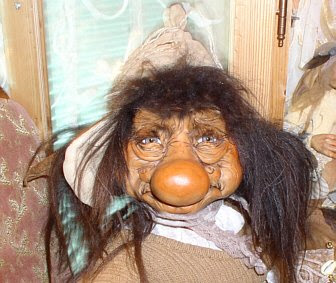 Now a week has gone by and that green Toad is still like he was at the beginning. Ruby has allready her own bag filled .. no ..overloaded with goodies from almost every inhabitant from my studio and nothing happened. Liesl is thrilled and stomping and crying and shouting and bidding....
For what ?
For more goodies from me to trade with Ruby !!!
Ruby is in best mood.
It´s not really a fair deal ,isn´t it ?

The only inhabitant, including myself, who didn´t try to kiss that strange greeny is a real Prince, a King, okay he is the King of thieves but he is loyal to us and wanted me to share this studio adventures with you to warn you. 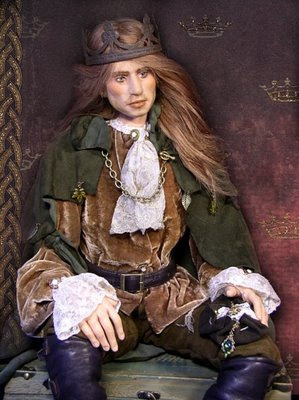 And the little greenish guy...? 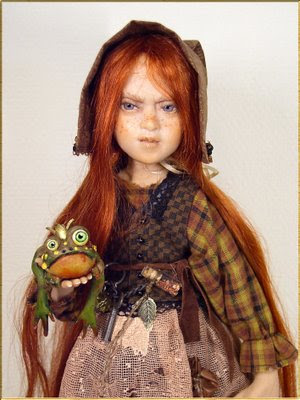 Oh he is cute, he´s really cute, he thinks everybody loves him !!! He is in best mood and get´s good food from everyone.He´s nice to everybody, makes everybody smiling.
Everyone is taking good care on him because maybe...eventually ...the right kiss will make him a beautiful Prince !!!!
Eingestellt von Silke Janas-Schloesser um 04:56 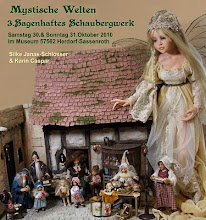 please click image to see more infos about the exhibition 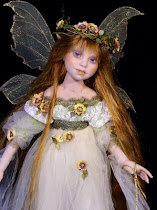 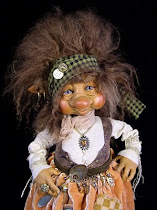 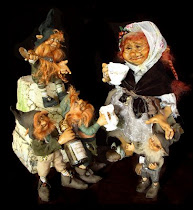 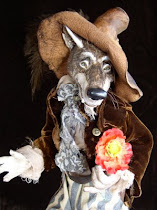 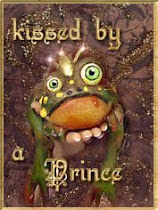 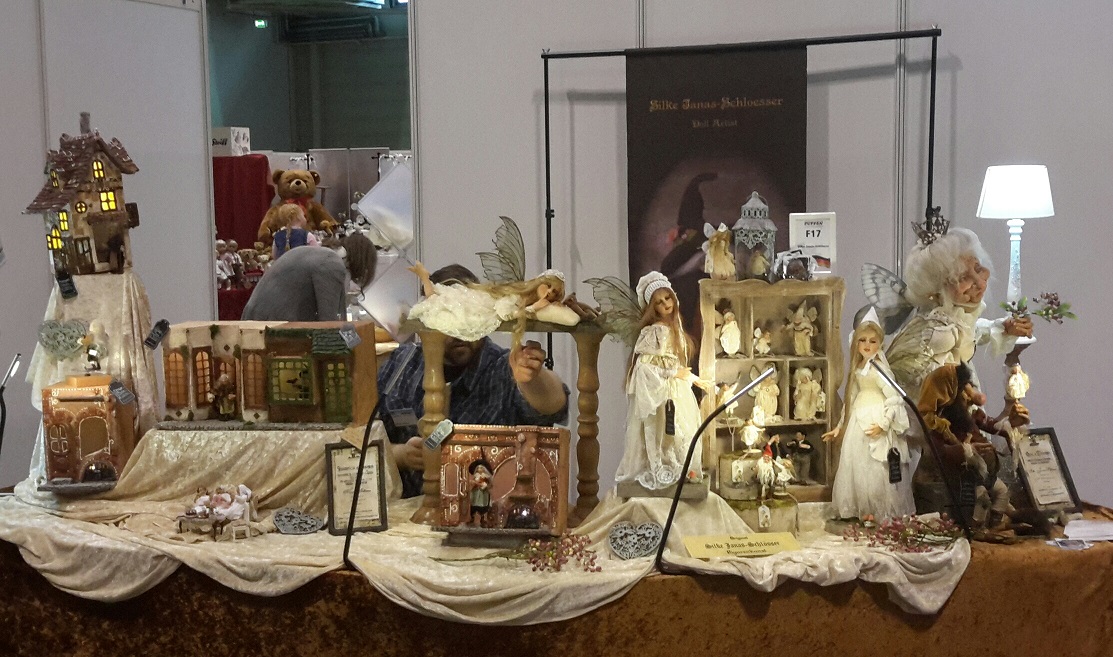 Meet the several faces/Blogs of my Faery Folk: 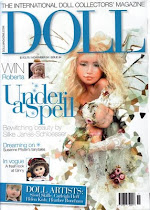 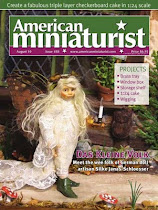 All contents Property and Copyright(c) 1992 -2019 Silke Janas-Schlösser . All rights reserved. You may not use my creations/designs in any form, that includes all of my written work, no exceptions, without my express permission. Please contact me through my website for any questions regarding this. Faery best wishes, Silke 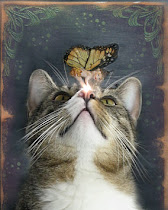